Deacon Schrader to be Ordained Priest 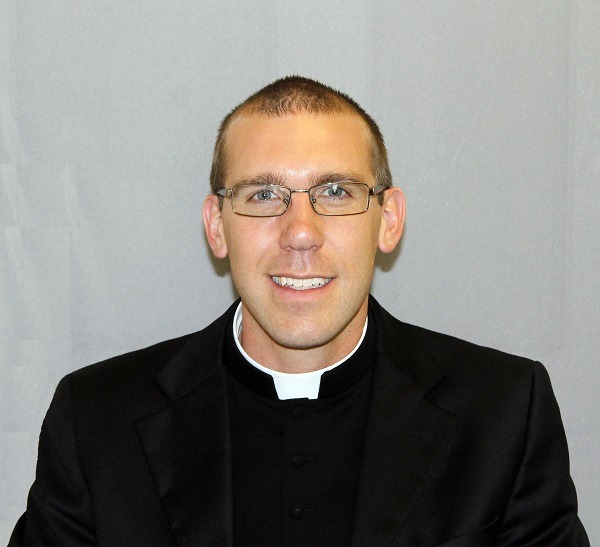 FALL RIVER — Transitional Deacon Jack Schrader will be ordained to the priesthood for service in the Fall River Diocese by Bishop Edgar M. da Cunha, S.D.V., in the context of an 11 a.m. Mass on Saturday, July 11, in St. Mary’s Cathedral, Fall River.

On the following day, Sunday, July 12, the newly-ordained priest will celebrate his first Mass at 3 p.m. in Corpus Christi Church in East Sandwich, his home parish since his family moved to Sagamore Beach in 2007.

As his ordination approaches, Deacon Schrader shared that he is eager to begin his service as a priest.

“I am looking forward to offering the Bread of Life to the People of God and contributing to the good work of the presbyterate of Fall River,” he said recently.

Deacon Schrader, who is 27, is the son of Steven and Diane Schrader and has one sister and one brother.

He was born at the Misawa Air Force Base in Japan where his father, a career Air Force pilot, was then stationed. He attended elementary and secondary schools in the U.S. and abroad, graduating from Aviano High School on the U.S. Air Force Base in Aviano, Italy in 2006.

After high school he earned a bachelor’s degree from the Franciscan University of Steubenville where he majored in Philosophy and Political Science.

He began preparing for the priesthood with Pre-Theology coursework at St. John’s Seminary in Brighton. For the past four years he has studied Theology at the Pontifical Gregorian University in Rome with residence at the Pontifical North American College there. In September, he will return to Rome to complete a final year of required studies for a licentiate degree in Sacred Theology from the Gregorian University.

He was ordained a transitional deacon last October at St. Peter’s Basilica in Rome.

Deacon Schrader credits a number of priests for their support and encouragement throughout his formation years, and he has asked one of them, Father David A. Pignato, to vest him in the context of the ordination rite with his stole and chasuble, the vestments worn by a priest at Mass. Father Pignato is a priest of the Fall River Diocese who is now serving on the faculty at St. John’s Seminary.

Deacon Schrader will be the first priest ordained for the Fall River Diocese by Bishop da Cunha since his installation as bishop here last September.

After his ordination, the diocese’s newest priest will reside at Corpus Christi Parish until his return to Rome in the fall. Bishop da Cunha has asked him to spend summer weekends visiting different parishes to preach at Masses and promote vocations to the priesthood.