FACE, which is the Foundation to Advance Catholic Education, held its 25th annual Fall Scholarship Dinner at White’s of Westport. Proceeds from the event support financial scholarships to assist with the costs of a Catholic education.

Kait Walsh, WPRI-TV news anchor and Bishop Stang High School, Dartmouth, alumna, served as the evening’s emcee for the second year in a row. Walsh, whose husband is also a Stang graduate, remarked from the stage on the importance of the mission of Catholic education.

“As (my husband and I) prepare to welcome our second child into the world, it gives us so much hope to know that everyone here shares our commitment to the special, welcoming, and nourishing environment that is found in our Catholic schools,” she said. 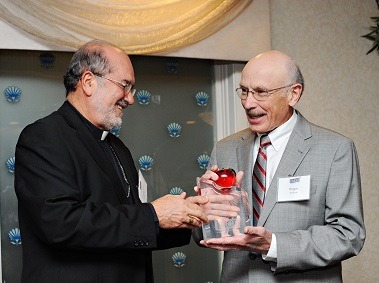 Cassidy Witkus-Gagnon, who is a junior at Coyle and Cassidy High School in Taunton, addressed the crowd, sharing her personal experiences as a Catholic school student. In addition to the academic and service experiences her Catholic education has offered, Witkus-Gagnon – who has created a Stocking Stuffer Drive that has to-date provided hundreds of gifts to children in need throughout her community – spoke about some of the more commonplace, everyday values her Catholic education has instilled.

“My Catholic education has shaped me into a person who holds the door for someone else; who stacks the dishes at the end of the table when I go out to eat to help the server; who returns the cart at the grocery store instead of leaving it in the parking lot; who moves a cart left in a parking space, so an elderly woman doesn’t have to get out of her car; and who is happy that she’s 16 years old, so she can finally donate blood at a blood drive,” she told the audience. 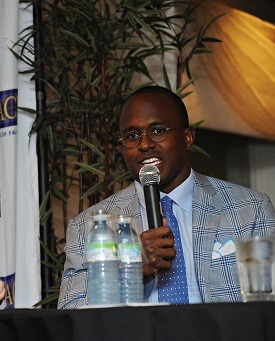 Afterwards, featured speaker Matthew Slater, three-time world champion and Special Teams Captain for the New England Patriots, spoke on how his strong Christian faith has influenced his personal life, family values, and football career. Guests enjoyed hearing from Slater -who had scored his first career touchdown two days earlier- and had a chance to pose for photos with the Super Bowl champion.

“For so many young people, your support makes that single, life-changing difference,” Bishop da Cunha told guests. “Tonight was our 25th dinner. I hope that, 25 years from now, our Diocese can say that it is stronger than it has ever been, through the blessings you are bestowing today.”

A total of nearly $300,000 was raised through this year’s event, thanks to the tremendous generosity of so many friends of Catholic education. All proceeds from the FACE Fall Scholarship Dinner go directly to student scholarships across the Diocese and make a difference for hundreds of students and families in need.