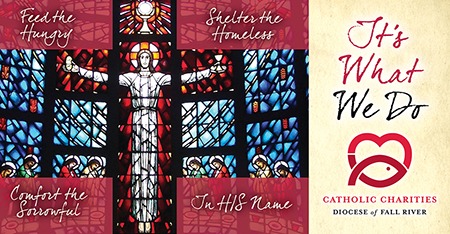 Feed the Hungry, Shelter the Homeless, Comfort the Sorrowful, in His Name: It’s What We Do was selected as the theme for the 2015 Catholic Charities Appeal, and donors responded to the call with a record-setting degree of generosity.

Proceeds from the Appeal, which ran from May 1 to June 30, provide the financial support for the many ministries and programs sponsored by the Diocese in Southeastern Massachusetts, Cape Cod and the Islands.

“Due to the efforts of our clergy and laity, we have established a new record of generosity and support for the social and pastoral needs of the Diocese,” said Bishop Edgar M. da Cunha, S.D.V., in a thank you letter to supporters.

“More importantly, this enables us to assist thousands of individuals throughout the Diocese who turn to agencies funded by the Catholic Charities Appeal for assistance with basic needs,” the bishop stated.

“We in the Fall River Diocese are blessed by the number of people who respond to this call to promote human dignity and to Christ’s call to ‘love thy neighbor.’ Your generosity is a tangible example of your commitment to this principle.”

In the name of the many thousands who are helped by Appeal-sponsored ministries and programs, “I extend my heartfelt gratitude,” said Bishop da Cunha.

Although figures for the number of donors in all of the parishes in the Fall River Diocese are not yet complete, it appears that more than 32,000 individuals and businesses were moved to support the Catholic Charities Appeal.

“We are enormously grateful for the hard work and week by week advocacy that our pastors and parish leaders put into this annual Appeal. Without their example and the strong message of encouragement from our Bishop, we would have far less success,” he said.

The results of the Appeal showed some amazing accomplishments across the entire diocese. Seventy-five percent (or 62) of the 83 parishes in the diocese had an increase over their 2014 Appeal total and of those with increases, 28 parishes recorded a double digit percentage gain including seven parishes that exceeded a 30 percent increase and two with more than 40 percent.

“I believe there are several factors that distinguish our Appeal in the mind of our donors.” Campbell said. “First, there is a genuine respect for the work being done on behalf of the poor by the Diocese of Fall River in meeting the needs of those it ministers to through the various agencies and apostolates. Also our pastors are the most important link in connecting Catholic Social Teaching with the imperative to help. Lastly, we are very proud of the sound stewardship which has always been a benchmark of the Appeal.”

“I am so proud of our priests and the lay leaders in every parish who worked so diligently on behalf of the poor,” he said.

“The response of a great number of people, parishes, and businesses in the Fall River Diocese to our annual Appeal demonstrates an abiding love of neighbor expressed in thought, word and deed.”