FALL RIVER – As the Church worldwide responds to Pope Francis call for a special Year of Mercy, the Fall River Diocese begins its annual Catholic Charities Appeal on May 1 with a theme of “Open 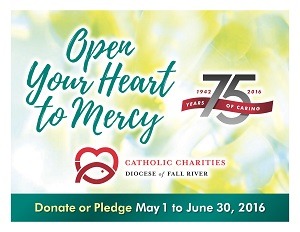 your Heart to Mercy.’

Proceeds from the springtime fundraising campaign provide the funding for the charitable services and programs sponsored by the Fall River Diocese throughout Southeastern Massachusetts, Cape Cod and the Islands.

In a letter on the Catholic Charities Appeal, Bishop Edgar M. da Cunha, S.D.V., cites the significance of 2016 not only as the Jubilee Year of Mercy but also as the 75th anniversary of the Charities Appeal.

“We have a remarkable record of providing for the poor and those in need of comfort even when we face adversity,” the bishop writes. “I hope you derive a sense of pride from answering the call to serve others. Through your participation you are witnessing the truth of Pope Francis’ message that Love is our mission.”

Bishop James Cassidy launched the first Catholic Charities Appeal in the Fall River Diocese in the spring of 1942 just months after the U.S. entry in World War II. The initial Appeal exceeded its goal by 50 percent, raising $150,000 to support war relief efforts at home and abroad.

Over the years, the Catholic Charities Appeal has continued to provide material and spiritual relief in response to the particular needs of the time. The Appeal now funds, for example, Catholic Social Services network of regional offices that sponsor emergency shelter and transitional housing, basic needs assistance, food pantries and vouchers, pregnancy and parenting support, foster care, refugee resettlement, advocacy programs for persons with disabilities and for immigrants, and crisis intervention.

Other services and ministries financed by the Catholic Charities Appeal include hospital chaplaincy, campus ministry, marriage preparation, programs for the bereaved, youth and young adult ministry, the Television Mass and more.

“I am so proud of the many ways we act with love in our communities,” Bishop da Cunha said. “Our people do so much to ensure that the Gospel is lived out and that God’s people are comforted.”

Bishop da Cunha expressed his thanks to donors for their “extraordinary example of generosity” to the Catholic Charities Appeal and is asking supporters to “‘Open your Heart to Mercy’ once again.”

This year’s theme, building off the Vatican Year of Mercy, seemed the ideal selection given that mercy is central to the point of the Appeal, explained Jim Campbell who is director of the Diocesan Development Office and of the Appeal.

“The temporal and spiritual services we provide to our neighbors in need through funding from the Catholic Charities Appeal are expressions of the Spiritual and Corporal Works of Mercy,” he said.

The Appeal is the one and only time during the year when the Fall River Diocese asks for financial help to fund its charitable agencies and programs, which are open to anyone regardless of creed, race, nationality, gender or economic status. It maintains a low administrative expense ratio: 94 cents of every dollar contributed is directed to the services and programs funded by the Appeal, according to Campbell.

The 2016 Catholic Charities Appeal will run through June 30. Additional information is available on the Catholic Charities website, www.frdioc-catholiccharities.org, including video testimonies from those who have been helped by Appeal-funded services, an audio message from Bishop da Cunha, and a statement of revenue and expenditures from the 2015 Appeal.

Would you like to support the Catholic Charities Appeal now? Donations may be made online : www.frdioc-catholiccharities.org