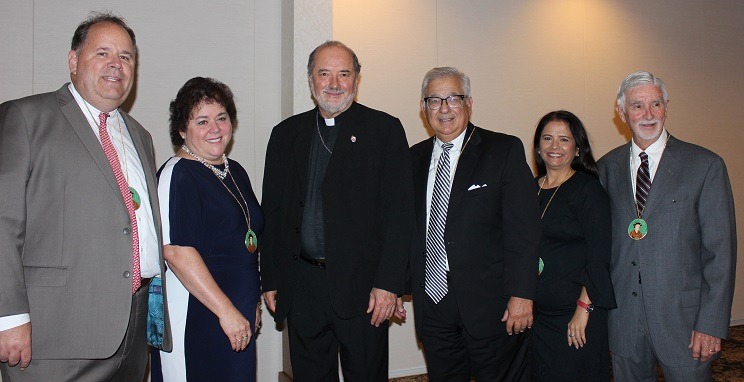 FALL RIVER — The Red Mass in the Fall River Diocese concluded on Saturday, September 28, 2019, with the presentation of the St. Thomas More Awards by Bishop Edgar M. da Cunha, S.D.V., to five members of the area justice system in recognition of their dedicated service.

The award is named for St. Thomas More, a 16th -century English layman and lawyer martyred for opposition to the divorce of King Henry VIII and for refusing to renounce papal authority. The award itself is a medallion embossed with a likeness of the saint, recognizes dedicated service by members of the area legal community.

The Red Mass is celebrated each year in St. Mary’s Cathedral in Fall River to invoke God’s guidance and strength on those who work to promote justice in the legal system.

Award recipients were nominated for the recognition by the Red Mass planning committee from across the diocese, headed by New Bedford attorney Michael J. Harrington.

Julian serves as co-chair of the Barnstable County Regional Substance Abuse Task Force and is a member of PCO Hope, a partnership organization that provides care and compassionate support to those suffering from substance use disorders and their families in Plymouth County.

Earlier in his career, he was for ten years an assistant district attorney in Suffolk County.

He is married and the father of three sons. A longtime resident of Cape Cod, he is a parishioner of Our Lady of the Cape Parish in Brewster.

Durkin Gray established her private practice of law in 1996 and concentrates in the areas of elder law, probate of estates and wills, and trusts. She is also now serving a five–year appointment as a public administrator for Bristol County, handling the estates of those deceased without a will or next of kin.

She earned her law degree from New England School of Law in 1990 and began her career at the Fall River-based firm of Corrigan, Johnson and Tutor.

Throughout the years, she has served as a director for numerous community service organizations including the Family Service Association of Greater Fall River; the United Way; Swansea Council on Aging; and Stanley Street Treatment and Resources, Inc. She was also a trustee of the Taunton State Hospital and a past president of the Fall River Bar Association.

In recognition of contributions, the Fall River Chamber of Commerce selected her to receive its John S. Brayton Community Service Award in 2010.

She is a lector at her parish of St. Francis of Assisi in Swansea, where she resides with her husband, Wayne.

She earned a bachelor’s degree in English and writing and communications from the University of Massachusetts-Dartmouth before studying for her master’s at Bridgewater State University. She is currently studying to attain certification to teach elementary education.

A lifelong resident of Fall River, she is a parishioner of Santo Christo Parish there and has taught in the parish’s faith formation program for some 30 years. She has also volunteered to serve scholarship fundraisers at St. Bernard Parish in Assonet.

Keches is president and founding partner of Keches Law Group, P.C. He has long been involved in workers’ compensation cases, the area in which he now concentrates his own practice.

He has taught Workers’ Compensation Law at the New England School of Law for over 13 years and lectures extensively in various legal education forums including those of the Mass. Bar Association.

Keches is a graduate of Suffolk University Law School in Boston.

As a child growing up in New Bedford, he attended St. George’s Greek Orthodox Church in that city and while he no longer living in the area, he continues to maintain ties with that faith community.

He has supported numerous educational, health and civic entities. He and his wife, Ann, established the Maguire Keches Projects Foundation to help persons and charitable foundations in need.

Mirroring that with an aim to facilitate ‘professional giving,’ Keches Law Group, P.C., has recently started Keches Cares to address the needs of the less fortunate.

Mathieu has been a practicing attorney in the Greater New Bedford Area for 58 years.

Born in New Bedford, he has served his native city through the years as a member of the city council; as city solicitor; and as a member and chairman of and later general counsel to the New Bedford Housing Authority.

He and his wife, Janet, raised six children with three of them following their father into the field of law. Mathieu now works two of his sons in their law office.

Upon moving his family to Freetown some years ago he joined the then-new parish of St. John Neumann and began 35 years of service as a Eucharistic Minister. He continues in that ministry today. Mathieu was chairman of the Building Committee that oversaw the planning and construction of the parish’s church, which was completed in 1988.