FALL RIVER — Bishop Edgar M. da Cunha, S.D.V., will join Pope Francis and all of the world’s bishops on Friday, March 25, 2022, in consecrating Russia and Ukraine to the Immaculate Heart of Mary.

In following a longstanding tradition in this Diocese, on that date -the Feast of the Annunciation of the Lord- a Pro-Life Mass is planned for at 11 a.m. in St. Julie Billiart Church in Dartmouth of which Bishop da Cunha will be celebrant and homilist. At the conclusion of that Mass, the bishop will at noon pray the Act of Consecration in communion with Pope Francis’ recitation of the same prayer in St. Peter’s Basilica in the Vatican at approximately the same time, which will be 5 p.m. in Rome.

The same act, on the same day, will be undertaken by all the bishops of the world.

Everyone is welcome to attend the Mass in St. Julie’s and the consecration that will follow. The faithful may also join via livestream on the diocesan Facebook page.

The Vatican announced late last week that Pope Francis is inviting “the bishops of the world and their priests” to join him in the act of consecration and in praying for peace.

Bishop da Cunha shared this invitation with priests of the Diocese of Fall River in a March 18th letter.

“As I’m sure you have heard, the Holy Father is inviting the whole church throughout the world to join him in the Act of Consecration of Russia and Ukraine to the Immaculate Heart of Mary,” the bishop writes. “Please make plans to join me, the Holy Father, and the Church throughout the world on this important moment of prayer and consecration to Mary, and of intercession for peace in the world.” 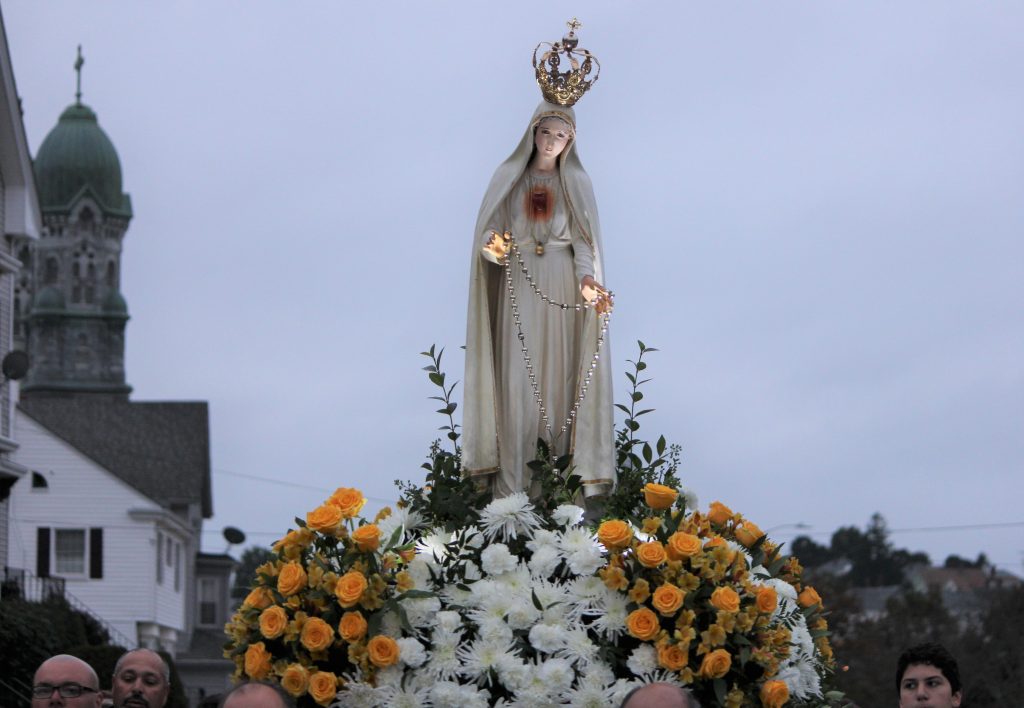 Our Lady of Fatima is carried in the annual Peace Procession held by the Diocese of Fall River each October.

Consecration to Mary is defined by the Vatican’s Congregation for Divine Worship as recognizing the “singular role of Mary in the Mystery of Christ and of the Church, of the universal and exemplary importance of her witness to the Gospel, or trust in her intercession and of the efficacy of her patronage.”

The word “entrustment” is often used synonymously with the word consecration.

“Responding to this prayer, we humbly ask Your Holiness to publicly perform the act of consecration to the Immaculate Heart of Mary of Ukraine and Russia, as requested by the Blessed Virgin in Fatima,” the letter continued.

In the apparition of 13 July 1917 in Fatima, Our Lady had asked for the consecration of Russia to her Immaculate Heart and the communion of reparation on the First Saturdays, stating that if this request was not granted, Russia would “spread her errors throughout the world, causing wars and persecutions of the Church,” and “the good will be martyred, the Holy Father will have much to suffer, various nations will be annihilated.”

The text of the Prayer of Consecration is provided below: