ATLANTA, Ga. — Nearly 700 members of the National Council of Catholic Women (NCCW) from around the country met in Atlanta, Ga. from August 26-29, 2019 for their annual convention, marking the group’s 99 years of service to the Church. This year’s theme, Caring for God’s Creation, showcased NCCW’s continuing efforts to address important needs of our times through spirituality, leadership and service. 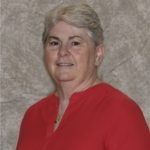 During the convention, Beth Mahoney (in photo at right), who is president of the Fall River Diocesan Council of Catholic Women and principal of St. Stanislaus School, Fall River, was installed as the Boston Province Director. As such, she will represent Catholic Women from Massachusetts, New Hampshire, Maine and Vermont in a two-year term as a member of the NCCW Board of Directors.

Mahoney has served as the National Spirituality Commission Chair from 2015-2017. During this term the commission produced a Mercy Retreat booklet and the Vocation Purse program to assist young women entering religious life with their financial debts. She also served as the NCCW Education Committee chair from 2017-2019 during which time committee members produced resources on Laudato Si and Evangelii Gaudium to help members reflect on the papal writings of Pope Francis, and introduced the guide for the high school councils.

Mahoney said she is “looking forward to her new role as the Boston Province Director” and “encourages new members to join.”

The convention program included keynote speaker Bishop Peter A. Rosazza D.D., Auxiliary Bishop Emeritus of the Archdiocese of Hartford, who discussed women’s response to Pope Francis’s plea to save Mother Earth, along with additional speakers addressing other issues important to the NCCW mission. Mother Dolores Hart, O.S.B., was awarded the first NCCW Honorary Lifetime Membership Award given to a distinguished American Catholic woman.

NCCW Commissions of Spirituality, Leadership and Service presented their efforts to combat human trafficking, their work on ways to respond to Pope Francis’s call to care for creation, and new resources for membership such as retreats for those mourning the loss of a family member to suicide.

NCCW was founded in 1920 under the auspices of the U.S. Catholic bishops. After witnessing the important work done by Catholic women’s organizations during World War I, the bishops called for the founding of NCCW to bring these organizations together, giving Catholic women in the U.S. a unified voice, a national service program and the ability to reach out to each other through a national organization.

Next year, NCCW will celebrate its 100th anniversary in the context of its annual convention in Arlington, Virginia.

For more information or to join, please visit the national website at www.NCCW.org or email Mahoney at frdccwbeth@gmail.com.