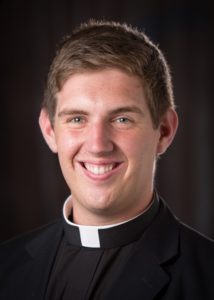 FALL RIVER — Deacon Ryan J. Healy (at right) will be ordained into the priesthood  for service in the Fall River Diocese by Bishop Edgar M. da Cunha, S.D.V., in the context of an 11 a.m. Mass on Saturday, June 1, in St. Mary’s Cathedral, Fall River.

On the following day, Sunday, June 2, the newly-ordained priest will celebrate his first Mass in his home parish church of St. John the Evangelist, Attleboro, where he was baptized and has been a lifelong member.

Though admitting to some nervousness as his ordination approaches, Deacon Healy said that he feels “a great sense of peace and reassurance that I am fulfilling a calling and vocation from the Lord.”

Deacon Healy, who is 26, is the son of Richard and Christine Healy of Attleboro and the brother of two sisters, Jennifer and Meaghan.

He is a 2011 graduate of Bishop Feehan High School in Attleboro. He attended Franciscan University in Steubenville, Ohio, for two years before entering Our Lady of the Providence Seminary in Providence, R.I., and Providence College from which he graduated in 2015. He continued his studies for the priesthood at St. John’s Seminary in Brighton, earning this spring a baccalaureate degree in Sacred Theology.

As a seminarian he spent summers assisting in pastoral work at Good Shepherd and St. Stanislaus Parishes in Fall River and at St. Elizabeth Seton Parish in North Falmouth.

He was ordained a transitional deacon in May 2018 and served in that capacity last summer at Holy Family Parish, East Taunton, and since last fall during weekends at Our Lady of Mount Carmel Parish, Seekonk, while finishing his final year at St. John’s Seminary.

Within the June 1st ordination rite, Deacon Healy will be vested with his stole and chasuble, the vestments worn by a priest at Mass, by his priest uncle, Rev. Patrick Healy, a member of the Congregation of the Missionary Oblates of Mary Immaculate, who will on the next day mark the 72nd anniversary of his own priestly ordination.

Deacon Healy describes his uncle as “a huge role model of the priesthood” for him.

While not yet knowing the parish to which he’ll be assigned once ordained, Deacon Healy shared that he’ll be happy to carry out his priestly ministry anywhere.

“I look forward to being able to learn as much as I can from whichever pastor I am assigned with, and joyfully contributing to the parish community I am called to serve.