FALL RIVER — Three transitional deacons will be ordained priests for service in the Fall River Diocese in an 11 a.m. Mass on Saturday, June 9, in St. Mary’s Cathedral, Fall River.

All three were ordained to the Transitional Diaconate last July. In the almost-year since, Deacons Gill and Muñoz Montoya have completed their seminary coursework and assisted part-time in diocesan parishes while Deacon Nunes has served full-time in parish ministry. 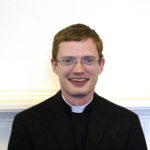 Deacon Gill is the son of William and Mary Gill and has one brother. Born in Providence, R.I., he grew up in Attleboro, attending St. John the Evangelist Parish there. He is a graduate of the parish’s elementary school and Bishop Feehan High School, also in Attleboro. After high school, he earned a bachelor’s degree from McDaniel College, Westminster, Maryland, with a major in environmental policy and a minor in Spanish studies. He studied for the priesthood at St. John’s Seminary in Brighton, Mass.

As a seminarian, he spent summers assisting at Holy Family Parish, East Taunton; Good Shepherd Parish, Fall River; and St. Elizabeth Seton Parish, North Falmouth. He also studied at the Mexican American Catholic College in San Antonio, Texas, to further his fluency in Spanish and took part in “The Rome Experience,” a summer program of classes, spirituality and culture in Rome. As a deacon, he served this past year at St. Ann Parish in Raynham and assisted with ministry to the Hispanic community at St. Mary Church in Taunton.

He will celebrate his first Mass at his home parish of St. John’s in Attleboro on Sunday, June 10, at 2 p.m.

In a recent interview, Deacon Gill shared his thoughts as his ordination draws near.

“It sounds cliché, but I’m most looking forward to celebrating Mass and hearing Confessions. I mean, that’s really the highlight for me,” he said. “I guess also helping people to grow in faith and helping them to deepen their prayer life and grow in a relationship with God.” 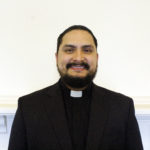 Deacon Muñoz Montoya was born in Medellín, Columbia, the son of Jorge Ivan Muñoz and Maria Victoria Montoya. He has two brothers and two sisters. After high school, he went on to nursing school at Facultad de Enfermería Universidad de Antioquia; and medical school at Facultdad de Medicina Universidad de Antioquia, both in Medellén. Completing those studies and sensing a calling to the priesthood, he came to the United States to begin preparations first at Immaculate Conception Seminary at Seton Hall University in South Orange, N.J., and then at St. John’s Seminary in Brighton.

During breaks from St. John’s, he assisted at St. John the Evangelist Parish, Attleboro, and at Holy Name Parish, Fall River. He served his diaconal year at Sacred Heart and St. Mary Parishes in North Attleboro, and at St. Mark Parish in Attleboro Falls.

Deacon Muñoz Montoya has opted to celebrate several Masses of Thanksgiving for the various parishes where he has served prior to ordination.

Looking ahead, Deacon Montoya is excited to begin his service as a priest especially the celebration of Sacraments.

“To celebrate a Baptism, to celebrate a wedding, to celebrate a funeral; I mean all the most important things that are a part of Christian life, and to be able to relate more with people — to be a father for them. That’s what I’m most looking forward to,” he said. 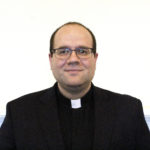 Deacon Nunes, a Fall River native, is the son of Paul and Karen Nunes, and grew up in Swansea with his one brother. His home parish is St. Dominic’s in that town. After graduation from Bishop Connolly High School in Fall River, he entered Our Lady of Providence Seminary in Providence, earning a degree in philosophy from Providence College. He continued studies for the priesthood at Mount St. Mary’s Seminary in Emmitsburg, Maryland, and St. John’s Seminary in Brighton, and served for one-year in between them at Holy Name of the Sacred Heart of Jesus Parish in New Bedford.

He took some time away and worked for private companies, then returned to continue his formation completing a pastoral year at Christ the King Parish, Mashpee. His summer assignments have included parish work at St. John the Baptist, Westport, and at St. Mary and Sacred Heart, both in North Attleboro; and participation in the Institute of Priestly Formation in Omaha, Nebraska.

He spent the last year in ministry as a deacon at Holy Name Parish in Fall River where he will celebrate his first Mass on Sunday, June 10, at 2 p.m.

Along with the celebration of Mass, Deacon Nunes also stressed the importance of hearing Confessions as part of priestly ministry.

“I’ve heard the stories of priests who have said that you hear this Confession of somebody who hasn’t gone to Confession in 40 years and you hear in their voice how they change after Confession and how they’re different,” Nunes said. “I look forward to being a doctor of souls and bringing someone back to Christ. I think the more time I spend in the Confessional, the better priest I’m going to be.”