The Vatican Congregation for Divine Worship and the Discipline of the Sacraments decreed on May 23, 2000 that “throughout the world, the Second Sunday of Easter will receive the name Divine Mercy Sunday, a perennial invitation to the Christian world to face, with confidence in divine benevolence, the difficulties and trials that humankind will experience in the years to come.”

The devotion to Jesus as “the Divine Mercy” reflects the writings of St. Faustina Kowalska, a Polish nun who wrote a diary of about 600 pages recording the revelations she received about God’s mercy. Even before her death in 1938, devotion to the Divine Mercy had begun to spread. 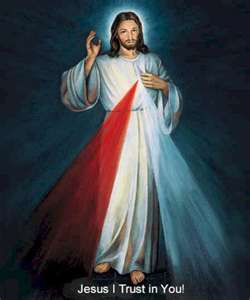 According to St. Faustina’s diary, she was told in a vision to paint an image of Christ’s divine mercy, and to encourage veneration of that image. She was not an artist, however, but with the help of her spiritual director arranged for a local artist to work with her on the painting. In that image of the Divine Mercy as well as in others that followed, Christ is depicted standing, with his right hand raised in a gesture of blessing. His left hand is on his chest over his heart, and rays of red and white light flow out toward the viewer. The image has been described as “not one of Christ in judgment but as a bringer of healing, forgiveness, and mercy.”

Saint John Paul II beatified Sister Faustina, a member of the Congregation of the Sisters of Our Lady of Mercy, in Rome in 1993, and canonized her on April 30, 2000, the Second Sunday of Easter, as the first saint of the Jubilee Year. During his homily at the canonization, the Pope declared that the second Sunday of Easter would from then on be celebrated as Divine Mercy Sunday throughout the universal Church.

Divine Mercy Sunday events from the National Shrine of the Divine Mercy will be live streamed and carried on EWTN. You will find the schedule here.