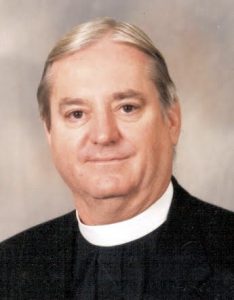 Reverend Paul Terrance Lamb, 84, a retired priest of the Diocese of Fall River and chaplain of the Sovereign Military Order of Malta, went to his eternal reward on December 23, 2021.

He is predeceased by his parents, Leon and Evelyn (Smith), and survived by his cousins Nelson (Joanne) Lamb of Wilmington, Delaware, and Doris Bea Campbell of Pawleys Island, South Carolina.

A native of Washington, D.C., and alumnus of Notre Dame University (1959), “Terry” (as he was known to his relatives and close friends) served in the U.S. Army and later worked as a stockbroker before discerning a vocation to the priesthood.

After graduate studies at The Catholic University of America in Washington, D.C., and Holy Apostles Seminary in Cromwell, Connecticut, he was ordained a priest at St. Mary’s Cathedral, Fall River, on June 8, 1996, by Bishop Sean P. O’Malley, OFM Cap.

Father Lamb served as parochial vicar at Holy Trinity Parish in Harwich and twice at St. Francis Xavier Parish in Hyannis, chaplain of Morton Hospital in Taunton, and pastor of St. Rita Parish in Marion until retiring in 2007. He enjoyed golfing, reading, watching old movies, playing bridge, and spending time with family and friends.

The wake will be he held in St. Francis Xavier Church, 347 South Street, Hyannis, on Monday, January 10, 2022, at 9:30 A.M., and the funeral Mass will be celebrated at 11:00 A.M. On Tuesday, January 18, 2022, a memorial Mass will be held at St. Bartholomew Church in Bethesda, Maryland, with burial following immediately at St. John’s Forest Glen Cemetery in Silver Spring, Maryland.

May the Lord grant Father Lamb the fullness of life promised to His faithful ones.