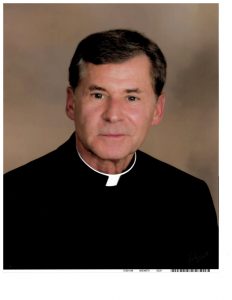 FALL RIVER — After 45 years of priestly ministry, Father Richard M. Roy (in photo), who is pastor of St. Julie Billiart Parish and chaplain to Bishop Stang High School, both in North Dartmouth, will be retiring as of August 1st.

Bishop Edgar M. da Cunha, S.D.V., announced late last month his acceptance of Father Roy’s request to retire, and at the same time his appointment of Father David A. Pignato to succeed Father Roy as both pastor and chaplain.

Born and raised in New Bedford, Father Roy graduated from Bishop Stang High School and prepared for the priesthood at St. Mary’s College in Kentucky and St. John’s Seminary in Brighton. He was ordained a priest for the Fall River Diocese on May 10, 1975 by Bishop Daniel A. Cronin.

He began his priestly ministry as a parochial vicar at St. Theresa of the Child Jesus Parish in South Attleboro. In 1981, he was reassigned in that same capacity to Sacred Heart Parish, Taunton, and then St. Mary’s, Taunton, while also serving as chaplain during those years at Coyle-Cassidy High School in that city.  Following that, Father Roy served as parochial vicar at Our Lady of Grace Parish, Westport; St. Patrick, Falmouth; and St. Joan of Arc, Orleans.

Father Roy was named pastor of St. Stephen Parish, Attleboro, in 1993, and returned to St. Joan Arc, Orleans, in 1996 this time as pastor. Ten years later, he became pastor of St. John the Evangelist Parish in Attleboro where he remained until beginning his current pastorate at St. Julie’s in 2012.

Through the years, Father Roy has served as spiritual director for several retreat movements, among them Cursillo, Emmaus, ECHO, and Engaged Encounter; as chaplain to several Knights of Columbus Councils; and has represented the Roman Catholic Church to the Cape Cod Council of Churches.

Father Roy shared in a recent article in the diocesan weekly, The Anchor, that while he “loves” being a pastor and being part of St. Julie’s, it is “time to step down from administration and enjoy the promises of retirement life.”

In doing that he plans to remain active in the diocese, pointing out that he has “been blessed with the help of many retired priests in my pastorates and now I look forward to filling in when I can.”

Father Pignato’s appointment as the new pastor at St. Julie Billiart Parish brings him back to the Fall River Diocese after teaching theology at St. John’s Seminary for the past 10 years.

It also brings him back to the parish where he once served as a parochial vicar a year after his ordination to the priesthood in 2001 by then-Bishop Sean P. O’Malley, OFM Cap. At the time, he also began serving as chaplain to Bishop Stang High School, remaining as chaplain when he later became secretary to former Bishop George W. Coleman.

In 2008, he began studies for a doctorate in dogmatic theology from the Angelicum University in Rome and upon receiving the degree two years later, began his teaching assignment at St. John’s Seminary.