FALL RIVER — Five priests will retire from parish ministry in the Fall River Diocese this summer after decades of dedicated service.

They will become effective June 26, with the exception of that of Father Harrington. He will begin a six-month sabbatical on that date and retire upon its conclusion on December 26, 2019.

This year, Monsignor Fitzgerald marked 51 years as a priest while the other four will enter into retirement after four-decades plus in ministry. Each has served in several parishes in the diocese and in a variety of other ministries. Most have indicated an intention to remain active to some degree, assisting with the celebration of Masses in area parishes and helping in other ways as needed. 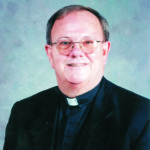 Msgr. Fitzgerald grew up in Taunton. After graduation from Monsignor Coyle High School in that city, he attended Boston College for two years before beginning studies for the priesthood at St. John’s Seminary in Brighton. He was ordained a priest on May 18, 1968 by Bishop James L. Connolly in St. Mary’s Cathedral in Fall River.

He was first assigned as parochial vicar at Holy Name Parish, Fall River, and while there he earned a master’s degree in education from Bridgewater State College.

In 1974, he began what would become decades-long service in healthcare ministries in the diocese, as director of the Pastoral Care Department at St. Anne’s Hospital, Fall River, from 1974-1986; as director of the diocesan Department of Pastoral Care for the Sick, 1977-1990; and since 1988 as executive director of Diocesan Health Facilities, which oversees the five skilled nursing and rehabilitative care facilities in the diocese and two community-based programs. He will retire from his health facilities post in June as well.

In addition, Msgr. Fitzgerald has served in two pastorates over the past 33 years. He was named pastor of St. John the Baptist Parish in Westport in 1986 and appointed to his current parish, St. Thomas More in Somerset, in 2006.

Through the years, he has also been diocesan liaison to the Cursillo movement, diocesan Secretary for Health Care, and dean of the Fall River Deanery.

He has twice been recognized with papal honors, in 1999 being named a Chaplain to His Holiness Pope John Paul II with the title of Reverend Monsignor and in 2012 being elevated to a Prelate of Honor to His Holiness. 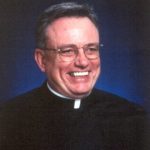 Father Goldrick is a New Bedford native and a graduate of New Bedford High School. He prepared for the priesthood at Resurrection College in Ontario, Canada, and St. Mary’s Seminary in Baltimore. He was ordained a priest on May 13, 1972 by Bishop Daniel A. Cronin in St. Mary’s Cathedral, Fall River.

In 1992, he was named administrator at St. Rita Parish in Marion and two years later was appointed to his first pastorate at St. Bernard Parish in Assonet.

Father Goldrick became pastor of St. Joseph Parish in North Dighton in 2007 and of the neighboring St. Peter’s in Dighton the next year, and he guided the two communities as they joined in 2008 to form the new St. Nicholas of Myra Parish, Dighton, of which he was founding pastor.

In 2012, he began his current post at St. Patrick Parish in Falmouth.

Along with his parish assignments he was also involved in a number of diocesan programs and committees including as chairman of “We Care/We Share” diocesan outreach initiative; service on the Diocesan Tribunal and Priests’ Council; and involvement in retreat programs including Emmaus, ECHO, and Cursillo.

In recent years, he wrote a popular and award-winning column, “The Ship’s Log: Reflections of a Parish Priest” for the diocesan paper, The Anchor.

Father Harrington was born in Wareham and grew up in New Bedford. He graduated from Holy Family High School in that city and earned a bachelor of science degree in physics from Providence College. He studied for the priesthood at St. Mary’s Seminary, Baltimore, and was ordained a priest on May 10, 1975 by Bishop Daniel A. Cronin in St. Mary’s Cathedral, Fall River.

During those years, he also oversaw ministry to the Spanish-speaking, serving as director of the Spanish Apostolate in Attleboro and then Taunton. He was also chaplain at Bishop Feehan High School in Attleboro. For almost 20 years, he was also a columnist for the diocesan newspaper, The Anchor.

In 1993, he was appointed pastor of St. Joseph Parish in Attleboro, and in 2000 became pastor of both St. Hedwig and Nuestra Senora de Guadalupe Parishes in New Bedford. In both assignments, he continued to work in Hispanic ministry as well.

He began his current pastorate at St. Francis of Assisi Parish, New Bedford, in 2002. 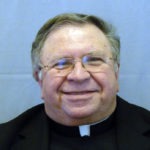 Father Medeiros was born in St. Michael in the Azores and immigrated to Fall River with his family as a child. After graduation from Bishop Stang High School, Dartmouth, he entered St. John’s Seminary in Brighton. He was ordained to the priesthood on May 10, 1975 by Bishop Daniel A. Cronin in St. Mary’s Cathedral in Fall River.

As a parochial vicar, he served at St. George Parish, Westport, and St. Anthony and Our Lady of Lourdes Parishes, both in Taunton. While in the latter parishes he was also chaplain at Taunton Catholic Middle School.

Along with his parish ministry, Father Medeiros was director of Marriage Preparation in the diocese for over ten years earlier in his priesthood and was later state chaplain to the Massachusetts Knights of Columbus. 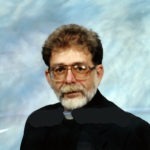 He served as parochial vicar at Our Lady of Fatima Parish, New Bedford; Sacred Heart, Fall River; St. John the Baptist, New Bedford; St. Anthony of Padua, Fall River; and Santo Christo, Fall River. In between assignments at the latter two parishes, he was chaplain at Charlton Memorial Hospital in Fall River for seven years.

In 1993, he returned to Our Lady of Fatima in New Bedford, where he was named a first-time pastor. Two years later, he was appointed to St. Dominic Parish in Swansea, from which he will retire after 24 years of ministry as pastor.