Living Mercy is the theme of this year’s Lenten Mission for parishes in the Fall River Deanery to take place March 14-17 with an afternoon and evening session offered each day. 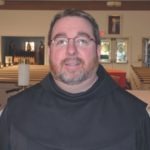 Franciscan Friar Thomas Washburn (in photo at right), a New Bedford native and former pastor in the Fall River Diocese, will preach the mission. Father Washburn is currently serving as executive secretary of the English-Speaking Conference of the Order of Friars Minor and is based in New York. He is also author of the blog, “A Friar’s Life.”

The Lenten Mission afternoon talk will be in the context of the 12:05 p.m. Daily Mass at St. Mary’s Cathedral from Monday through Thursday. The Cathedral is located at the corner of Second and Spring Streets in Fall River.

In the evening Mass and the Mission talk will be offered at 7 p.m. at different parishes in the Deanery. The schedule is as follows:

Confession will be available each evening at 6 p.m.

As the Church celebrates the Jubilee Year of Mercy proclaimed by Pope Francis, this Mission offers an opportunity for all to take some time during Lent to reflect on its theme.

Father Washburn joined the Immaculate Conception Province of the Franciscan Order of Friars Minor in 1991 and was ordained a priest in 2000. He served as an associate in parishes throughout New England and was pastor of St. Margaret Parish in Buzzards Bay from December 2010 April 2012. He has served his province as vocations director and communications director. His executive secretary assignment with the English-Speaking Conference of the Order of Friars Minor is his primary ministry right now. The Conference is made up of 1,600 friars from provinces in the United States, Canada, England, Ireland, Malta and Lithuania. Father Washburn works to coordinate the ministry among member provinces and to foster collaboration.