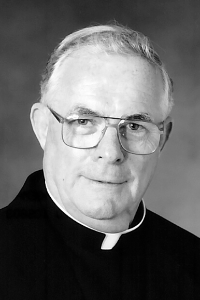 Reverend Monsignor John J. Smith, a retired priest of the Diocese of Fall River, passed away at Catholic Memorial Home in Fall River on December 28, 2021. He was 89 years old.

Born in New Bedford, he was the son of the late Ambrose and Nora (Sparrow) Smith. Msgr. Smith attended St. Mary’s Seminary in Baltimore, Maryland and was ordained to the Priesthood on April 25, 1959, by the Most Reverend James L. Connolly at Saint Mary’s Cathedral in Fall River.

Following his ordination, he served as Parochial Vicar at St. Patrick Parish in Wareham and St. James Parish in New Bedford. He also served as temporary Administrator to Corpus Christi Parish in East Sandwich and St. John the Evangelist Parish in Attleboro. He was Director of Vocations from 1968 – 1997. In 1987, he was raised to the rank of Prelate of Honor by His Holiness, Pope John Paul II. In 1989, until his retirement in 2006, he served as Pastor of Saint Pius Tenth Parish in South Yarmouth.

During his time in active ministry, Monsignor Smith also served as Chaplain of the Serra Club of Attleboro, the St. John’s Council #404 of the Knights of Columbus of Attleboro and assumed the responsibility of the Newman Chaplaincy at Southeastern Massachusetts University in North Dartmouth. He also served as moderator of the Catholic Nurses of the Cape and Islands District, and was a member of the Council of Priests, College of Consultors and Episcopal Vicar for the Cape Cod and the Island Deanery of the Diocese of Fall River.

Msgr. Smith will be transferred to St. Lawrence Church, 565 County St., New Bedford on Monday, January 3, 2022, at 3 PM, where he will lie in state until a Vigil Service at 6 PM. A Mass of Christian Burial will be celebrated on Tuesday, January 4, 2022, at 11 AM. Burial will follow in St. Mary’s Cemetery in New Bedford.

May the Lord grant Monsignor Smith the fullness of life promised to His faithful ones.