NEW BEDFORD — Parishioners in the New Bedford Deanery will have two opportunities each day to take part in their deanery’s Lenten Retreat set for March 19 – 21. The retreat will be offered in the context of both a 12 noon and 7 p.m. Mass each day at St. Mary’s Church, which is located at 343 Tarkiln Hill Road in New Bedford. All are invited to attend. 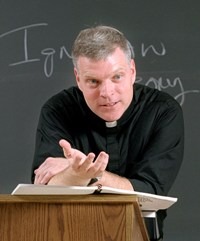 Jesuit Father Jack Butler (in photo at right), who oversees Mission and Ministry at Boston College, will lead the three-day retreat. Beginning at Boston College in 2002 as a campus minister, he became founding director of the college’s new Manresa House in 2007, a place where members of the BC community could go to explore a  religious vocation. At the same time, he served as vocations director for the New England Province of the Society of Jesus. In 2010, he was appointed vice president for the Division of University Mission and Ministry at Boston College. The college’s website explains that, “The Division of University Mission and Ministry coordinates and develops the university-wide process of maintaining and promoting the distinctive academic and societal mission of Boston College as a Catholic and Jesuit university.”

The New Bedford Deanery Lenten Retreat will also offer daily opportunities for the Sacrament of Reconciliation. Confessions will be heard 30 minutes before each of the Masses.