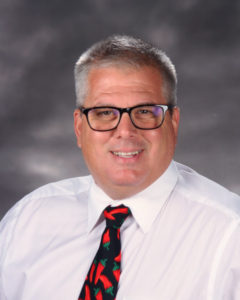 TAUNTON — Michael O’Brien has been appointed principal of St. Mary Primary School in Taunton. He takes on the new post after 14 years at Coyle and Cassidy High School and Middle School, also in Taunton, where he has been a teacher, coach and an administrator.

The change in the school’s leadership followed the decision earlier that week of former St. Mary School Principal Elyse M. Sackal to offer her resignation, citing a desire to return to teaching. She had been principal there for one year.

O’Brien, who is 53, had been serving as the Assistant Vice Principal of Student Affairs and Director of Middle School Athletics at Coyle and Cassidy. He was also varsity Girls Basketball coach. He joined the staff of the school as a history teacher in 2002.

He holds a bachelor’s degree in history from the University of Massachusetts in Dartmouth and a master’s in education from Endicott College in Beverly, Mass.

An opportunity for parents and guardians to meet O’Brien has been set up for next week.

In his announcement of the change at St. Mary’s, Interim Superintendent Perla expressed the “deep gratitude” of the Diocesan Catholic Schools Office to Sackal “for her leadership and commitment to St. Mary Primary School during the past school year” and wished her well as she moves on.

He also announced that the leadership team of Coyle and Cassidy High School and Middle School has agreed to work “in collaboration with Mr. O’Brien to strengthen St. Mary Primary School,” in a number of areas including recruitment and development.

St. Mary’s School, which serves grades pre-kindergarten through five, will open for the new school year on Wednesday, August 31.

In her letter to parents and guardians announcing her decision to resign, Sackal explained that while she enjoyed “many aspects of being a principal, my heart and passion continues to remain in teaching and working with children. It took this past year for me to realize how much I miss it.”

She noted it was not an easy decision as she had deep affection for the entire school community.

Her letter also updated parents and guardians on improvements made to the school’s physical plant over the summer and on new programs that will be implemented this academic year in different grade-level curriculums.