FALL RIVER − The Fall River Diocese will welcome a new priest and a new deacon this Saturday, June 13, as Holy Orders are conferred in the context of an 11 a.m. Mass in St. Mary’s Cathedral in Fall River. 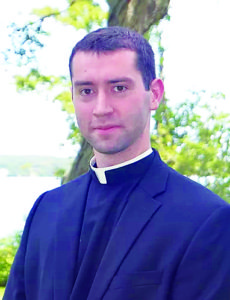 Booth, 27, is the son of Harry and Mary Ann Booth of Dartmouth. He grew up in that town along with his two brothers and two sisters. He is a graduate of Bristol County Agricultural High School in Dighton.

He has prepared for the priesthood at Our Lady of Providence Seminary in Providence, R.I. during which time he attended Rhode Island College and Providence College, and also at St. John’s Seminary, Brighton, where he earned a degree in Theology. He was ordained a transitional deacon in May 2019 in his home parish church of St. Francis Xavier in Acushnet. He has been serving at Our Lady of Mount Carmel Parish in Seekonk for the past year as he completed his seminary formation.

Deacon Booth has been co-sponsored in the seminary by the Archdiocese for Military Services, USA. Following his ordination, he will serve in ministry in the Fall River Diocese for three years and then enter into a period of service as a military chaplain.

Describing his upcoming ordination as a “blessing” in an interview with the diocesan paper, The Anchor, Booth shared that he is “looking forward to my time as a priest and in my own small way, I am looking forward to the work of bringing in God’s harvest.”

When asked about being ordained at a time of so many challenges, he responded, “I think our actions done for the love of God are even more powerful during difficult times.” 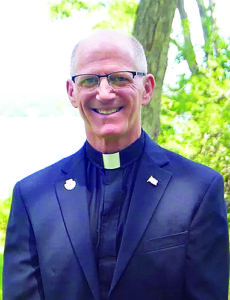 Scheffer will be ordained a transitional deacon on Saturday and begin the final leg of his journey toward his ordination as a priest. The 59-year-old retired U.S. Army lieutenant colonel has been in formation for the priesthood for the past three years at Pope St. John XXIII National Seminary in Weston, Mass.

The son of Peter and Joan Scheffer, he grew up in New Jersey with two sisters. He attended high school there, and then entered the U.S. Military Academy at West Point. As an officer in the U.S. Army he served over the years in different capacities. He is a veteran of wars in Iraq and Afghanistan and of other operational missions. He was an assistant professor in the Department of Joint, Interagency and Multinational Operations at Fort Leavenworth, Kansas, at the time of his 2016 retirement after which he came to Southeastern Massachusetts.

Scheffer is a parishioner of St. Pius X Parish in South Yarmouth.

Reflecting on his vocational call in an interview in The Anchor, Scheffer recalled that in the midst of his military service he “somehow felt this pull which told me that there was more I was supposed to do with my life every time I was in the presence of a Catholic priest. I always had this subtle nudge that tapped me on the shoulder and this voice that whispered to me: ‘Pete, that’s where you need to be –in the service of God and His Church.’”

Because of the current coronavirus pandemic, the Ordination Mass is not open to the public. The Ordination will be livestreamed on the diocesan Facebook page at www.facebook.com/fallriverdiocese.org.