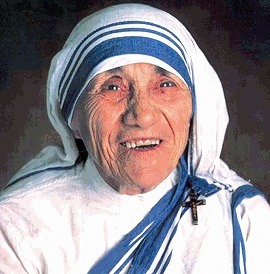 Pope Francis will declare Blessed Teresa of Calcutta a saint in ceremonies at the Vatican on September 4, 2016. Mother Teresa was widely seen as a living saint as she ministered to the sick and the dying in some of the poorest neighborhoods in the world. Her simple service touched the hearts of millions of people of all faiths.

Her canonization will undoubtedly bring back for many in the Fall River Diocese memories  of her visit to New Bedford on June 14, 1995.

Mother Teresa arrived there on that day to visit with members of her Missionaries of Charity community who a few years earlier had come to New Bedford at the invitation of then Fall River Bishop Sean O’Malley, OFM Cap., to establish a convent and begin their ministry in the city.

A Mass to honor the visit of Mother Teresa was celebrated that day in St. Lawrence Martyr Church, New Bedford, which is located across the street from the Missionaries of Charity convent. Bishop O’Malley was principal celebrant and homilist of the Mass. At its conclusion, Mother Teresa addressed the congregation. An overflow crowd of hundreds and hundreds who were unable to fit into the church stood outside and listened to the Mass via outdoor speakers. The Mass was carried live on WLNE-TV, Channel 6, Providence, and many other regional and local media outlets.

Click these links to take a look back at her visit to our Diocese:

Mother Teresa in New Bedford in Photos (courtesy of The Anchor)

Thank You Note from Mother Teresa

Mother Teresa was born to an ethnic Albanian family in Skopje, in what is now part of Macedonia. She went to India in 1929 as a Sister of Loreto and became an Indian citizen in 1947. She founded the Missionaries of Charity in 1950. Shortly after she died in 1997, St. John Paul II waived the usual five-year waiting period and allowed the opening of the process to declare her sainthood. She was beatified in 2003. The date chosen for her canonization is the eve of the 19th anniversary of her death and the date previously established at the Vatican for the conclusion of the Year of Mercy pilgrimage of people like her who are engaged in works of mercy.

On Sunday, September 4, the day of her canonization, an 11 a.m. Mass in honor of the new St. Teresa of Calcutta will be celebrated at St. Lawrence Martyr Church, 565 County St., New Bedford. Sisters of the Missionaries of Charity currently serving in New Bedford will be present and will participate in the Mass. All are welcome to attend. A reception will follow.

Catholic TV and EWTN will both carry extensive coverage of the canonization of Blessed Teresa. Please check your local cable guide for channel numbers in your community.