Red Mass to Honor Five Members of the Justice System 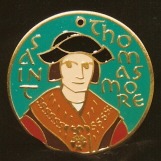 FALL RIVER — Five people serving within the area justice system will be given the St. Thomas More Award in recognition of their dedicated service at the annual Red Mass to be celebrated at 4 p.m., Saturday, September 28, in St. Mary’s Cathedral in Fall River.

The Red Mass is celebrated each year in the Fall River Diocese to invoke God’s guidance and strength on those who work to promote justice in the legal system. The Mass is a longstanding tradition in the Church and is widely celebrated in dioceses throughout the United States.

Bishop Edgar M. da Cunha, S.D.V., will be principal celebrant and homilist at the Mass.

The Red Mass is so named because of the color of the vestments worn during the liturgy, which is the Mass of the Holy Spirit, who will be invoked upon those in attendance.

The presentation of the St. Thomas More Awards at the conclusion of the Red Mass is a tradition unique to the Fall River Diocese. The award is named for St. Thomas More, a 16th -century English layman and lawyer martyred for opposition to the divorce of King Henry VIII and for refusing to renounce papal authority.