Retirements of Two Priests, New Assignments for Others Announced

The Bishop has accepted the request to retire of the Reverend Monsignor Daniel F. Hoye, who is pastor of Christ the King Parish, Mashpee, and the Reverend Michael M. Camara, parochial vicar of Santo Christo Parish, Fall River. Both will retire June 30, 2016.

Msgr. Hoye has served as a priest for 44 years, Father Camara for 27.

Along with the retirements, Bishop da Cunha has announced the following appointments:

Additional appointments, which will take effect on June 29, 2016, are as follows:

Additionally, Bishop da Cunha has accepted the nomination of the Very Reverend Johnathan A. Hurrell, ss.cc., Provincial Superior of the Congregation of the Sacred Hearts, U.S. Province, and has made the following appointments:

Msgr. Hoye is a native of Taunton, one of nine children born to the late Charles E. Hoye, M.D., and Virginia M. Hoye.

After graduating from St. Mary’s Grammar School and Monsignor James Coyle High School in that city, he prepared for the priesthood at St. Thomas Seminary in Bloomfield, Conn., and then at St. John’s Seminary in Brighton, Mass., where he earned two bachelor of arts degrees and a master’s degree in theology.

He was ordained a priest on May 13, 1972 by Bishop Daniel A. Cronin in St. Mary’s Cathedral, Fall River.

He served as a parochial vicar, first at St. John the Evangelist Parish, Attleboro, and then St. Mary Parish, Norton, before undertaking graduate studies at the Catholic University of America leading to a licentiate in canon law in 1975. He was then named vice officialis of the Fall River Diocesan Tribunal.

Upon his return to the diocese in 1989, he was appointed pastor of St. John the Evangelist Parish in Attleboro. At the same time, he was named episcopal vicar for the Attleboro-Taunton area and a judge for the Diocesan Tribunal. In 2006, he began his current pastorate at Christ the King Parish in Mashpee. 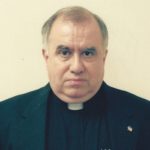 Father Camara is the son of the late Anthony M. Camara Jr. and Rose L. Camara. He was born and raised in Fall River with two sisters and graduated from the city’s B.M.C. Durfee High School.

Having entered the Franciscan Friars, Province of the Immaculate Conception, in 1973, he was Brother with the community for 15 years.

He received a bachelor of arts degree in religious education from St. Vincent College in LaTrobe, Penn., and taught at Christopher Columbus High School in Boston and also taught and was dean of students and assistant headmaster at Serra Catholic High School in McKeesport, Penn.

He went on to attend St. Vincent Seminary in LaTrobe and was ordained to the priesthood on May 27, 1989 in St. Michael’s Church in Fall River by Bishop Virgilio Lopez, OFM, of Trujillo, Honduras.

Since his ordination, he has served as a parochial vicar at several parishes in the Fall River Diocese: St. Kilian, St. John the Baptist, Our Lady of Mount Carmel, and Our Lady of the Immaculate Conception, all in New Bedford; Holy Family Parish, East Taunton; and St. Michael Parish, Fall River. For the past four years, he has served in that capacity at Santo Christ Parish, also in Fall River.

He was incardinated into the Fall River Diocese in February 1998.

Through the years, he has also been parochial administrator at the former Our Lady of Health Parish, on the faculty of Bishop Connolly High School, and chaplain at Saint Anne’s Hospital, all in Fall River.