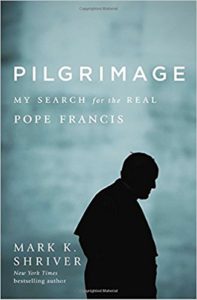 FALL RIVER — Mark K. Shriver, whose 2016 book, Pilgrimage: My Search for the Real Pope Francis, is both an insightful portrait of the pope and a reflection on Shriver’s own journey of faith, will be the featured speaker at the 23rd annual Fall Scholarship Dinner to benefit students attending Catholic schools in the Fall River Diocese.

Sponsored by the Foundation for the Advancement of Catholic Education or FACE, the Fall Scholarship Dinner will take place on Thursday, October 26, at White’s of Westport, beginning with a 5:30 p.m. reception.

For the book, Shriver travelled to the pope’s native Argentina to talk to persons who knew him as a child, as a young Jesuit priest, and later as archbishop of Buenos Aires. Shriver’s talk at the Fall Dinner will look at the fruits of that journey, its impact on him personally, and the relevance of the pope’s message in today’s world.

An advocate for children throughout his career, Shriver led a national coalition that convinced Congress to create the National Commission on Children and Disasters of which he became an appointed member and the elected chairperson.

He is also author of the best-selling memoir, A Good Man: Rediscovering My Father, Sargent Shriver, published in June 2012.

Shriver lives in Maryland with his wife and three children.

The FACE Fall Scholarship Dinner will feature a reception and extensive multi-course meal followed by a brief program and the presentation by Shriver.

In the current school year alone, FACE is providing $1.4 million in need-based scholarships to 1,100 Catholic school students in the Fall River Diocese. Of that amount, $112,000 is being directed to 56 students who are part of a new “Hope and Opportunity Initiative,” which aims to reach elementary school students living at or below the poverty line with expanded tuition aid.

“By investing in our schools, we also invest in the future of our Church and the well-being of our broader community,” write John J. Feitelberg and Nick Christ, FACE Dinner chair and FACE Board chair, respectively, in a letter of invitation to the Fall Dinner.

Last year marked the most successful fundraising year in the history of FACE and its predecessor, the St. Mary’s Education Fund, including the establishment of three separate one-million dollar gifts, two of which are permanently endowed.

In the context of the Fall Scholarship Dinner program, Bishop Edgar M. da Cunha, S.D.V., will present the annual Timothy Cotter Friend of Catholic Education Award to Mary and George Agostini of Seekonk, in recognition of their many years of service to FACE and the St. Mary’s Education Fund. They are members of Our Lady Queen of Martyrs Parish in Seekonk.

Those interested in supporting the Fall Scholarship Dinner through sponsorship opportunities or by purchasing individual tickets should contact the Diocesan Development Office at 508-675-1311 or visit www.FACE-DFR.org.