St. Anthony of Padua Relics to Tour Diocese in August 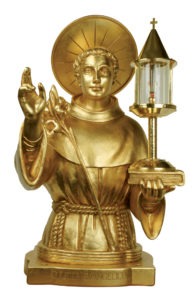 Conventual Franciscan Father Alessandro Ratti will bring the holy relics from the saint’s Basilica, St. Anthony of Padua, in Padua, Italy. Father Alex, as he is known, is one of 54 priests of the Franciscan Order of Friars Minor Conventual  who minister in the Basilica where the saint is buried.

The two exquisite reliquaries, one of which contains layers of skin of the saint’s cheek and the other a fragment of his floating rib, have been venerated by Pope Francis, Pope Benedict, St. Mother Teresa, St. John Paul II and Servant of God, Sister Lucia of Fatima.

The relics will be on display for veneration at the following parishes:

Mass will be celebrated at 12 noon to welcome the two relics and veneration begins after the midday Mass, with a concluding Mass at 7 p.m.

Mass at 9 a.m., followed by Veneration until 12 noon

According to Friar Mario Conte, the executive editor of the Messenger of St. Anthony, a magazine written, published and printed by the Franciscan Friars in Padua for the English-speaking world, “There is nothing superstitious about relics. The real meaning of a relic is love — they are a link of love between the person who venerates and the saint. In recognizing that only God performs miracles, it is through the communion of saints that we are brought closer to Our Lord.”

In an address in Cologne, Germany on Aug. 18, 2005, Pope Benedict Emeritus said of relics, “By inviting us to venerate the mortal remains of the martyrs and saints, the Church does not forget that, in the end, these are indeed just human bones, but they are bones that belonged to individuals touched by the living power of God. The relics of the saints are traces of that invisible but real presence which sheds light upon the shadows of the world and reveals the Kingdom of Heaven in our midst.”

Father Alex will bring the petitions back to the Pontifical Basilica in Padua and place them at the tomb of St. Anthony. The tour officially ends back at the Tomb of St. Anthony where the Friars will gather to pray for the saint’s intercession upon our intentions and petitions.

St. Anthony of Padua was a Portuguese Catholic friar belonging to the Franciscan Order. He was born and raised in a wealthy family in Lisbon. He died in 1231 and was buried in a little church outside the walls of the town of Padua. He was canonized within a year after his death, the shortest time in the history of the Church. His remains are now kept in the Basilica in Padua, Italy. Noted by his contemporaries for his preaching and expert knowledge of Scripture, he was proclaimed a Doctor of the Church in 1946.