FALL RIVER — Three priests will retire in early summer after offering decades of service in the Fall River Diocese.

The retirements of Father Bellenoit and Monsignor Oliveira will take effect June 28 and Father Salvador July 5.

While those dates will bring an end to administrative responsibilities, each has indicated his intention to remain active in ministry, helping out with Masses and in other ways at area parishes.

All three prospective retirees observed his anniversary of ordination to the priesthood last month, with Father Bellenoit marking 45 years a priest, Monsignor Oliveira 50 years, and Father Salvador 43 years. A look back at their ministry over those years exemplifies in the case of each a dedicated priestly vocation carried out in parishes, chaplaincies, apostolates and administration in service to Catholics in the Fall River Diocesan Church. 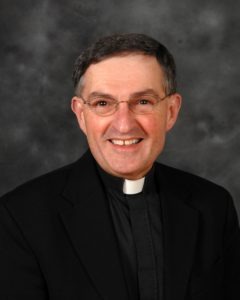 Father Bellenoit was born in New Bedford, the son of the late Omer G. and Domenica (Bollea) Bellenoit. He attended Holy Name School in that city and Bishop Stang High School in Dartmouth, graduating in 1964. He prepared for the priesthood at St. Thomas Seminary in Bloomfield, Connecticut, and St. Mary’s Seminary in Baltimore, Maryland.

He was ordained a priest by Bishop Daniel A. Cronin on May 13, 1972 in St. Mary’s Cathedral in Fall River.

Father Bellenoit first served as parochial vicar at St. Mary Parish, Mansfield, and then at St. Mark Parish, Attleboro Falls, before being assigned to hospital ministry at Charlton Memorial Hospital in Fall River in 1983. While serving at St. Mark’s, he was also chaplain at Bishop Feehan High School in Attleboro.

In 1990, he was named director of the Diocesan Department of Pastoral Care for the Sick and three years later, while maintaining that post, became pastor of St. Patrick Parish in Somerset. In 1996, he returned to St. Mary Parish in Mansfield, this time as pastor, and oversaw construction of the parish school. He served there for ten years until his appointment to his current pastorate at St. Pius X Parish in 2006.

Through the years, he also served on the Diocesan Tribunal and as a member of the Presbyteral or Priests’ Council and was dean of the Attleboro Deanery. Last fall, he concluded his work as co-chair of a special Fall River Diocese Task Force on Catholic Education which met for over a year-and-a-half to complete an extensive assessment of diocesan schools. 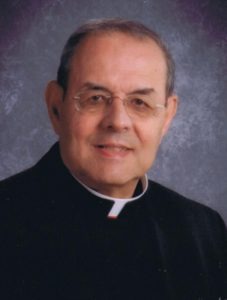 Monsignor Oliveira, also from New Bedford, is one of six children including a twin sister born to the late John J. and Celina (Cordeiro) Oliveira. He is a graduate of Our Lady of Mount Carmel School and Holy Family High School, in 1959, both in his native city. He attended Our Lady of Providence Seminary in Warwick Neck, R.I., and then completed theological studies at St. Mary’s Seminary in Baltimore, and was ordained to the priesthood by the late Bishop James L. Connolly on May 20, 1967 in St. Mary’s Cathedral, Fall River.

For the first five-years of his priesthood, he served as an assistant at St. John of God Parish, Somerset; Our Lady of Mount Carmel, Seekonk; St. John the Baptist, New Bedford; and St. Anthony, Taunton.  He was also a chaplain at Dominican Academy and Mount St. Mary’s High School, Fall River; Bishop Stang High School, Dartmouth; and Coyle and Cassidy High School, Taunton.

Shortly after ordination, he also completed work for a master’s degree in education from Rhode Island College.

In 1972, he began what would become 23 years of service as Secretary to the Bishop, first under Bishop Daniel A. Cronin and then Bishop Sean P. O’Malley, OFM Cap. During those years, he also held various positions in the Diocesan Chancery, eventually becoming Chancellor and Vicar for Administration.

In 1995, Bishop O’Malley appointed him pastor of St. Mary Parish in New Bedford and in 2002 as director of the Permanent Diaconate for the Fall River Diocese.

For 40 years, Monsignor Oliveira has also served as diocesan director of the Society for the Propagation of the Faith and the Missionary Cooperative Office.

In addition, he has been Secretary for Education and Evangelization; episcopal vicar for New Bedford; diocesan Archivist; chairman of the Personnel Board; and a member of the College of Consultors and the Presbyteral Council.

He has been recognized with papal honors three times, being named a Chaplain to His Holiness with the title of Monsignor in 1977, a Prelate of Honor in 1987, and a Protonotary Apostolic in 1994. 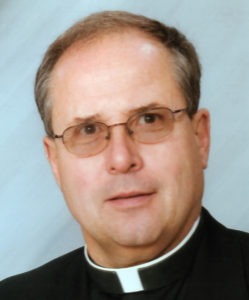 Father Salvador, son of the late Seraphim and Agnes (Borges) Salvador, was born and raised in New Bedford with two sisters. He attended the city’s T.R. Rodman School and is a 1966 graduate of New Bedford High School. After high school, he entered St. Mary’s College Seminary in St. Mary, Kentucky, to study for the priesthood and finished his preparation at St. Mary’s Seminary in Baltimore.

He was ordained a priest by Bishop Daniel A. Cronin on May 11, 1974 in St. Mary’s Cathedral, Fall River.

He began his priestly ministry as a parochial vicar at St. John the Evangelist Parish, Attleboro, and went on to serve in the same capacity at St. John of God Parish, Somerset, and St. Anthony of Padua Parish, Fall River.

From 1986 to 1993, he was assigned to hospital ministry as a chaplain at St. Luke’s Hospital in New Bedford.

He was named to his first pastorate at Holy Ghost Parish in Attleboro in 1993 where he remained for seven years before becoming pastor of Saints Peter and Paul Parish in Fall River.

In 2014, he began his current post as pastor of St. George’s in Westport.

For almost all of his priesthood, Father Salvador has been involved in Scouting. In 1977, he became chaplain to and board member of the Moby Dick Boy Scout Council and of the Plymouth Bay Girl Scout Council and then went on to establish a unified Catholic Committee on Scouting in the diocese. Through the years, he served as chaplain to the Diocesan Committee on Scouting, as the New England region chaplain for  the National Catholic Committee on Scouting (NCCS),  and as an advisor to the NCCS. (The NCCS facilitates the inclusion of the Boy Scouts of America program in dioceses and parishes across the country as a form of youth ministry.)

In 2006, he was appointed national chaplain to the NCCS, which required his service in three successive leadership posts over a nine-year period. He carried out those responsibilities while continuing in parish ministries.