Three Pastors to Retire this Summer

FALL RIVER — Three priests will retire from parish ministry in the Fall River Diocese this summer after years of service.

Each has offered decades of dedicated priestly service in several parishes and in a variety of other ministries. Fathers Bouchard and Oliveira both observed their 46th anniversary of priesthood last month. Father Powell will mark 42 years as a priest later this month.

Though leaving parish administration all three have indicated an intention to remain active, assisting with the celebration of Masses in area parishes and helping in other ways as needed. 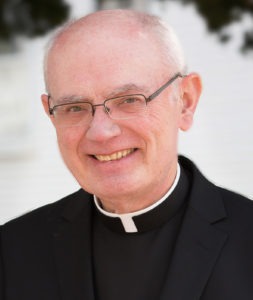 Father Bouchard was born in New Bedford, the son of the late Henry R. and Leona M. Bouchard. He attended the former St. Joseph School in that city and then Bishop Stang High School, Dartmouth, graduating in 1964. He studied for the priesthood at St. Thomas Seminary in Bloomfield, Conn., and St. John’s Seminary in Brighton, Mass. He was ordained to the priesthood on May 13, 1972, by Bishop Daniel A. Cronin in St. Mary’s Cathedral, Fall River.

First assigned as a parochial vicar for three years at St. Joseph Parish, Taunton, he then entered the Catholic University of America in Washington, D.C., for advanced studies, earning a licentiate degree in Systematic Theology in 1977. Returning home, he was appointed diocesan director of Youth Ministry and assistant diocesan director of Religious Education and also as an assistant in parish ministry first at Notre Dame Parish, Fall River, and then Holy Family Parish, East Taunton.

In 1984, he began a four-year assignment as parochial vicar at St. Julie Billiart Parish, North Dartmouth, and chaplain at his alma mater, Bishop Stang High School.

In 1988, he was named pastor of Sacred Heart Parish in North Attleboro, remaining there until 1994 when he became pastor of Corpus Christi Parish in East Sandwich. In his pastorate at Corpus Christi he oversaw the design and construction of a new 1,500-seat church for the parish, which was dedicated in 2003. He went to Nantucket in 2010 to assume his current post at St. Mary’s-Our Lady of the Isle Parish.

Through the years, Father Bouchard also served in additional assignments including as diocesan director of Stewardship, of Continuing Formation for Priests, and of the Television Mass Apostolate; as chaplain to the Attleboro and later Cape Cod districts of the St. Vincent de Paul Society; and in the Marriage Prep program in several deaneries. 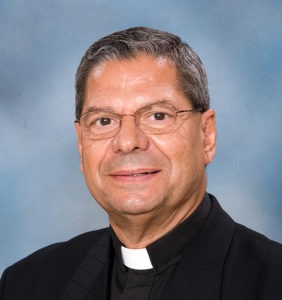 Father Oliveira, son of the late Altino and Maria Luisa Oliveira, is a native of Ponta Delgada, Sao Miguel, Azores. After attending schools in Ponta Delgada, he prepared for the priesthood at the Seminario Episcopal de Angra in the Azores, and at the Catholic University of Portugal in Lisbon. He was ordained in1972 for the diocese of Carmona in Angola and then served there as parochial vicar at the Cathedral of Carmona and then as pastor of Our Lady of Fatima Church in Carmona City.

While there, he also served on the diocesan Tribunal and Presbyteral Council and as diocesan director of Communications and of the Cursillo movement.

He was appointed pastor of St. Anthony of Padua Parish in Fall River in 1994. One year later, he returned to Santo Christo Parish, this time as pastor, where he has served for the past 23 years.

Since 1978, Father Oliveira has coordinated the broadcasts of the weekly Mass in Portuguese on the Portuguese Channel, and since 1994 has served as diocesan director of Communications for Portuguese ministry. 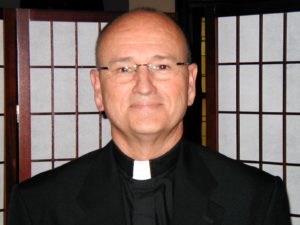 Father Powell was born in Acushnet and is the son of the late Arthur E. and Violette E. Powell. He is a graduate of the former St. Anne School, New Bedford, and of Bishop Stang High School, Dartmouth, in 1967.

After high school, he entered the Congregation of the Sacred Hearts, completing postulancy and novitiate in 1968 in Wareham. He continued preparing for the priesthood at St. Mary’s College in Winona, Minn., and the Washington Theological Union. In 1976, he professed final vows as a member of the Sacred Hearts Community, and was ordained a priest on June 19, by Bishop Daniel A. Cronin in St. Joseph Church, Fairhaven.

Over the next 13 years, he served at Damien High School in La Verne, Calif.; as director of the Sacred Hearts Retreat Center, Gallup, New Mexico; in campus ministry at the University of California-Davis; and as vocation director and novice master at the Sacred Hearts Novitiate in Hemet, Calif.

Seeking a life of greater prayer in the contemplative tradition, in 1989 he transferred into the Camaldolese Benedictine Monks at the New Camaldoli Hermitage in California, where he remained for nine years.

Father Powell began ministry in the Fall River Diocese in 1998, as a parochial vicar at St. Pius X Parish, South Yarmouth, then at St. Julie Billiart Parish, Dartmouth, and later St. Mary Parish, North Attleboro, where he became administrator. While there, he also served as a hospital chaplain at Sturdy Memorial Hospital in Attleboro.

In 2006, he was appointed pastor of St. Joan of Arc Parish in Orleans where he served for eight years until coming to St. Lawrence Martyr Parish in 2014.