Thank you, Bishop, for giving me the opportunity to share on this occasion. 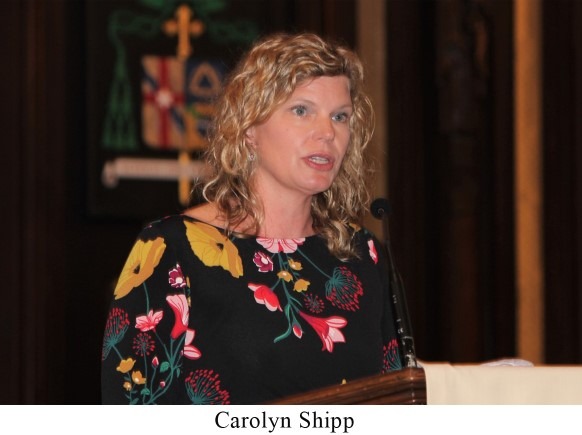 During the summer of 2019, I saw a job posting for the Victim Assistance Coordinator for the Diocese of Fall River and I knew I had to apply. Like so many Catholics, I have felt helpless as the waves of the clergy sex abuse scandal have crashed over our Church again and again. I wondered how God might be calling me to work toward healing in our church. In this position, I saw an opportunity to bring my professional background as a Licensed Clinical Social Worker to work as instrument of healing in the church that I love.

Soon after I began in this job, a mentor who has worked with survivors of clergy abuse for decades shared how she views encounters with survivors as “treading on holy ground.” Now that I have been on this path for a little while, I can think of no better way to describe these experiences. It is profoundly moving when someone who has been so deeply wounded by the Church is willing to let me, someone representing the church, into their pain. That they are willing to contemplate telling their story, usually after decades of secrecy, is an act of unbelievable courage.

One such courageous survivor has allowed me to share some of his story today. His journey reflects the important steps that Bishop da Cunha and our entire team have taken to promote healing in this Diocese. Here are his words:

“My name is “John” and I am a 57-year-old graduate of a high school in the Diocese of Fall River.  During my high school years,  I befriended a priest who was an educator at my school.  The relationship crossed many boundaries that today would be considered sexual and emotional abuse.  Back in the 70’s and 80’s, it was encouraged to be silent, and as one religious superior said to me, “accept that he (the priest) is suffering from a disease like cancer.”  I did, but twenty years later, the experiences emerged again shattering my stability and relationships.  I finally reached out to the sponsoring order of that priest.  The order offered some pastoral support and compensation for the therapies I needed to endure.  The order shifted its personnel, the support ended and I found myself on my own for almost twenty years.

During a regression of strength and spirit, I reached out to the Diocese of Fall River in January of 2019 for counsel and support since the Diocese was the sponsor of my high school.  The Diocese was going through its own restructuring and didn’t quite have a strong response team in place. Honestly, it was extremely frustrating for my concerns to be cordially but not constructively heard.

I reached out every few months until a year later, I was warmly and constructively received by the new pastoral team for safe environment.  I was still hesitant to trust, and accept the outreach, and I am quite sure the team was anxious about meeting me.

Atonement, what does it mean in a situation like this?

I have every reason to be angry, mad, and frustrated about how this journey has gone and the indifference I have experienced along the way.  Yet, something led me to be persistent and continue with reaching out to the Diocese, who I felt was somewhat though not as directly responsible as the powerful religious order that sponsored the school. However, I believe that all the leaders share some blame for allowing a serious breach of boundaries between adult staff and students at this school.  At least 8 staff during my time there were credibly accused.  I walked the halls with these other individuals, while dealing with my own trauma.  This environment should never have been allowed.

Atonement, what does it mean to me as a survivor?

It means that the Diocese did not give up on its responsibility almost forty years later and continued the work of healing which did not happen when I was a student.  The pastoral relationship we have now is real, constructive, personal, and healing.

In all my meetings with this team, including the Diocese’s educational leaders I was met with acceptance, support, and an unconditional desire to help heal me emotionally, physically, spiritually.  The spiritual damage is the most serious, and over the past year, it is the first time I have felt a sincere desire to help me heal that part of my life.

I feel there is atonement.

In spite of all this, mess….in quite simple terms, I still consider myself to be a Catholic who is searching for the faith I lost when I was a high school student.  It is there, I know it is, but it is slowly emerging again in hopeful exuberance that there is unconditional support for the healing that still needs to happen.

That is the journey of atonement for me…and it began in what I would have considered the most unlikely place, but with the Diocese that had an indirect relationship with the school where it all happened.

You took ownership when others did not.  Thank you for that.”

And thank you, John for allowing me to share these words with you.

When Bishop concludes this Mass in a few moments, we will hear the song The Prayer of St. Francis with its familiar refrain: “make me a channel of your peace.”

I ask all of us here in-person and watching online, how is God calling you to be a channel of peace and healing in the church? I know God has called me to this job, but certainly all of us are called in some way.

Is it through taking seriously our completion of the Essential Three requirements to minister or volunteer in the Diocese? The Essential Three is outlined in the Diocesan Policy for Protecting the Faithful  and includes the background check, safe environment training and code of conduct. These requirements may seem like chores to get out of the way, but they exist to create a culture of safe environment throughout the Diocese, so that hopefully no child today has to experience what John did.

Maybe we are called to take time to pray for those who have experienced abuse, especially during this Child Abuse Prevention month?

Perhaps the call is to be mindful of the way we speak about clergy abuse, recognizing that there may be a survivor in our midst?

In whatever way God is calling you, please join me in this important mission. Thank you.

Watch the April 11th Mass of Atonement in its entirety on the Diocesan YouTube channel.