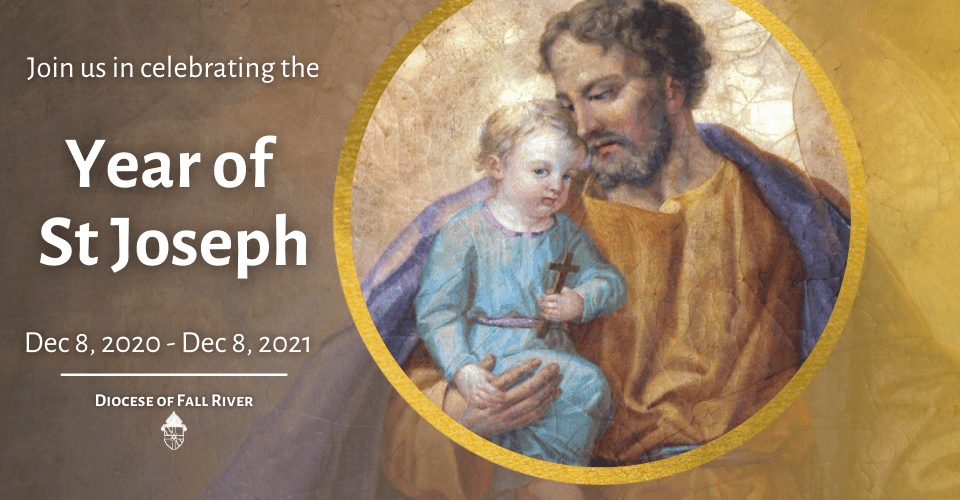 FALL RIVER  ̶  A Marian priest and author whose work includes a book on the need to turn to the care of St. Joseph, will inaugurate the Fall River Diocesan observance of the Year of St. Joseph with a free virtual presentation.

Father Donald Calloway of the Congregation of Marian Fathers of the Immaculate Conception of the Most Blessed Virgin Mary will offer a talk on Living the Year of St. Joseph at 7 p.m. on Tuesday, March 2.

Pope Francis announced last December 8 that a Year of St. Joseph would take place in the Catholic Church from that date until December 8, 2021. The Pope’s declaration of the special year marked the 150th anniversary of the saint’s proclamation as patron of the Universal Church by Pope Pius IX on Dec. 8, 1870.

Father Calloway is the author of “Consecration to St. Joseph: The Wonders of our Spiritual Father,” published just last year.

David Carvalho, who is Senior Director for Faith Formation, Youth, Young Adult and Family Life Ministries in the Fall River Diocese, explained that Father Calloway “has undertaken exhaustive research into St. Joseph, bringing to light an important figure in salvation history who is otherwise not well known.”

Father Calloway will speak on how we can live this year as a prequel to the Diocesan Consecration to St. Joseph, with preparation for the consecration beginning on March 30.

An author of numerous academic articles and several books, Father Calloway is also a frequent conference presenter who speaks passionately on Divine Mercy and the Blessed Virgin Mary in his moving conversion story.

Father Calloway is a convert to Catholicism. Before his conversion to Catholicism, he was a high school dropout who had been kicked out of a foreign country, institutionalized twice, and thrown in jail multiple times. After his radical conversion he earned a B.A. in Philosophy and Theology from the Franciscan University of Steubenville, M.Div. and S.T.B. degrees from the Dominican House of Studies in Washington, DC, and an S.T.L. in Mariology from the International Marian Research Institute in Dayton, Ohio.

In announcing the Year of St. Joseph in his apostolic letter, Patris Corde (“With a father’s heart”), Pope Francis said Christians can discover in St. Joseph, who often goes unnoticed, “an intercessor, a support and a guide in times of trouble.”

Bishop Edgar M. da Cunha, S.D.V., is encouraging members of the Fall River Diocese to take part in opportunities to observe this special year, noting the “example and model” of St. Joseph.

“Now more than ever we need his prayers and intercession and his example and model for us, individually and for our families,” the bishop said.

As a model, Carvalho said, “There is no better for us now than St. Joseph, who was an ‘ordinary’ person and is silent in the Gospels. Yet, he was faced with tremendous challenges, fleeing with his family to protect them. He shows us how to be people of action, to care for our families, and to lead others closer to Christ.

The March 2 virtual talk by Father Calloway is free. To register, visit fallriverfaithformation.org/stjoseph