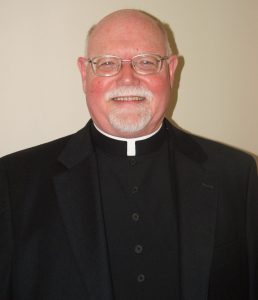 FALL RIVER ─ Father Leonard P. Hindsley (in photo at right), the longtime pastor of St. John the Baptist Parish in Westport, retired in September after more than 35 years of priestly service in parishes and in academia.

He is quick to describe his time at St. John’s at his “happiest years as a priest,” citing the parishioners and exceptional parish staff.

“I miss being pastor of such a remarkable group of Catholics, but I do not regret retiring,” he said. “It was the right decision and the right time.”

Born and raised in New Jersey, he was ordained a priest for the Dominican Order on May 25, 1984 after preparation at the Dominican House of Studies in Washington, D.C.

He served at Providence College for many years, beginning as an instructor in Religious Studies, then becoming an assistant professor of Humanities, an associate professor of German, and in 1998 a professor of Humanities. He was chairperson of the college’s Department of Modern Languages for three terms; the director of the Global Studies major; and was a member of the Committee of Academic Rank and Tenure for five terms.

In 2000, Father Hindsley began parish ministry in the Fall River Diocese as a parochial vicar first at Notre Dame de Lourdes Parish in Fall River and then at St. Mary’s in North Attleboro, while continuing to also serve at Providence College. In 2005, he was incardinated into the Fall River Diocese and the next year was appointed pastor at St. John’s in Westport.

A prolific writer, he has had numerous articles and books published including The Mystics of Engelthal: Writings from a Medieval Monastery and Margaret Ebner: Major Works.

In retirement, he plans on continuing to write and has this ambitious goal: “I plan on finishing three books for publication: A translation of the Revelations of Adelheid Langmann, A German Dominic mystic of the 14th century; a mediation on the Nine Mode of Praying of St. Dominic; and a translation and commentary on the Revelations of Christina Ebner, another German Dominic mystic of the 14th century,” noting that he will also be helping out at parishes after the New Year.

Father Hindsley grew up in Brooklawn, N.J. He earned a bachelor’s degree from La Salle College in Philadelphia in 1972; a doctorate in Germanic Languages and Literatures from Rutgers University in 1980; and a licentiate in theology from the Dominican House of Studies in 1985.

When asked about his observations of changes in his years of priestly ministry, Father Hindsley shared:

“I remember the beauty and solemnity of the Mass when I was a child and as a priest, using the new rite, I always tried to maintain that spirit, but to celebrate the Mass in a joyous and happy way. I think parishioners warmed to that experience although it took a lot of work for us to achieve it. A view of the Mass needed to change from being an obligation to a wondrous necessity of life. The preaching had to change from an exposition of the readings to a direct application of the teachings of Jesus to the lives of the people. The singing had to increase in volume and quantity to lift up the congregation to a participation in the Divine and Heavenly Liturgy while still in this life. The Mass is not a drudge to be raced through as quickly as possible. It needs time and effort to work its wonders on the priest and the people.”

As for looking forward, Father Hindsley acknowledges that the Church is facing many challenges -both within it and from the outside- but said, “if we keep our eyes fixed on the Lord who brings us life in abundance here and now and life to come forever, these problems will not be so challenging to our faith.

With the retirement of Father Hindsley, Father Paul Bernier and Father Christopher M. Peschel, who serve as pastors of the other parishes in Westport, have begun serving as pastors in solidum, or conjointly, at St. John’s, providing shared pastoral leadership. While doing so, the priests are retaining their individual pastorates at their respective parishes of St. George and Our Lady of Grace.